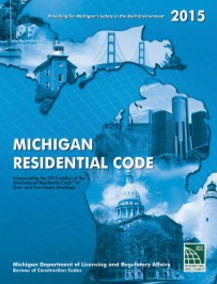 Attention Michigan builders and remodelers!  As I’m sure you’ve heard, the State of Michigan will begin enforcing the new 2015 Michigan Residential Code on February 8, 2016.  As part of this new code, the State has adopted the 2015 edition of the International Energy Conservation Code (IECC), edited appropriately for Michigan buildings. The addition of the 2015 IECC code has many Michigan builders and contractors calling us with questions so we thought we would put together a quick list of new requirements that everyone will have to incorporate beginning February 8th.

The Blower Door Test (BDT) is designed to find the source of air leakage in new homes (post-construction) or existing homes (prior to remodeling). The 2009 IECC offered contractors the choice between a visual test and the blower door test, allowing for flexibility.  However, the 2015 IECC requires a BDT on all residential new construction.  Furthermore, to avoid conflict of interest, builders and contractors are not permitted to perform their own BDT’s and must hire an independent 3rd-party to complete the testing, average cost running between $250 – $450 USD.

The required locations for the carbon monoxide alarms remains unchanged from the 2009 IECC.

In previous versions of the Michigan Residential Building Code there was only one sentence regarding deck construction.  The new 2015 code provides more than 4 pages of instruction on how to properly build a deck.

These are just a handful of the topics covered in the 2015 code book.

For the best new way to complete your education requirements,

visit www.licensetobuild.com or give the friendly staff a call

Donald Davis - Pittsfield MA
Chat with us
Scroll Up