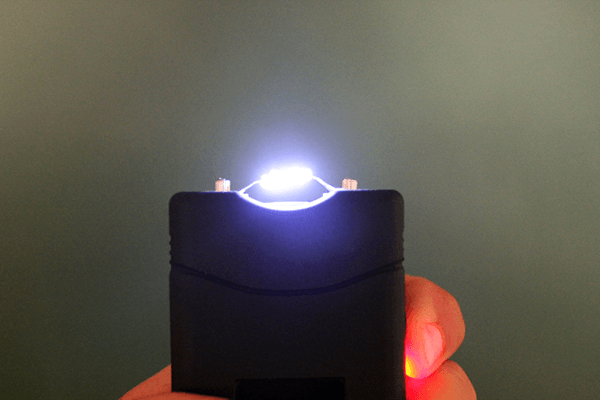 What would you do if you found yourself in a situation where you needed to defend yourself against an attacker?  Would you be prepared to fight or would you flounder? If you're like me, you've already visualized various scenarios and how you'd handle them. Look in your car or purse, do you have the means to thwart an attack if necessary?  Have you thought about getting a Stun Gun?  Trust me, you're going to want an ECD!  While a stun gun may not be for everyone, I'm going to tell you just about everything you need to know to help you make the right decision for you.
What is a Stun Gun?
A Stun Gun (also known as an Electronic Conducting Device (ECD) is an electrical self-defense device designed to use high voltage to stop an attacker. There are metal prongs located at the tip which send an electric shock that quickly immobilizes the attacker. Stun guns are designed to key into the nervous system and send high pulse frequencies that stimulate the muscles to work very rapidly, but not efficiently. It depletes blood sugar by converting it to lactic acid within seconds, resulting in energy loss and difficulty of movement. The attacker becomes disoriented and confused, they are rendered passive for several minutes, allowing you precious time to escape. Just in case you were wondering, there is no significant effect on the heart or other vital organs.

How long does it take to immobilize a would-be attacker?

Will I get shocked if my attacker is touching me when I use it?

No, you will not get shocked, even if you and your attacker are wet or standing in water.

Will it still shock my attacker through a shirt or jeans?

Yes, they are designed to be effective even if used in an area that is covered by fabric.

Do I need a special license or permit to own a Stun Gun?
It would be a good idea to investigate whether or not there are any restrictions in your State, for example, Rhode Island, New York, Massachusetts, Michigan, Illinois, Connecticut, and Hawaii are states where they are restricted.  Check with your local police department.
If I have Pepper Spray and a Stun Gun, can I use both at the same time?
It is not recommended to use both. Pepper spray is highly flammable, and there is a chance of setting the assailant on fire.
What type of device is right for me?
There are dozens of options when choosing your device. Stun Guns come in a variety of shapes and sizes as well as voltage options. They can be disguised as a lipstick, flashlight, cell phone, canes and walking sticks to name just a few. Just do a Google search and you'll have no trouble finding the one that suits your particular needs.

Once you've purchased the Stun Gun of your dreams, here is a 3 step lesson on how to use it.

Now that you've learned a thing or two about stun guns, I hope you never find it necessary to use one.  Always be aware of your surroundings, educate yourself by taking a class on Personal Safety and Self Defense.   Always trust your instincts, if your gut tells you something isn't right, get out quickly.