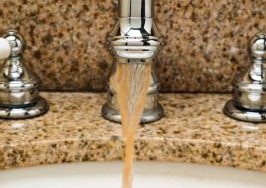 The United States has a major infrastructure problem. Many of the pipes bringing water to homes, hospitals, and businesses are over 150 years old. Although lead pipes were banned 3 decades ago, more than 10 million lead pipe systems remain.

Two industries, plastic, and iron are currently lobbying to take charge of the $300 billion project. The plastics industry has used Flint as evidence that iron pipes are not a good solution. Upwards of 8,000 children were exposed to lead in unsafe levels in Flint and two outbreaks of Legionnaires' disease followed. Plastic lasts longer and has no possibility of leaking lead into drinking supplies.

On the other hand, some local governments believe the plastics industry is using their money to wage an unfair war against iron piping. Many scientists feel that a rapid replacement of iron pipes with plastic will lead to another set of health problems as it becomes increasingly clear that chemicals can find their way into water carried through plastic pipes. The pipes themselves can leach chemicals and contaminated groundwater can find its way through plastic pipes far easier than iron.

Local governments nationwide will determine if they prefer lead or plastic on a case-by-case basis and plumbers across the nation can expect an uptick in government work over the next decade.