EPA Extends Approval of Dicamba-Based Products for 2021 Season & Beyond 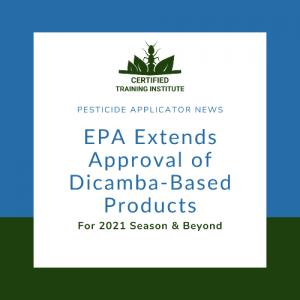 The decision is not free from controversy, however.

In a previous blog, we outlined the bumpy road dicamba has experienced over the past few years – culminating in June 2020 when the U.S. Ninth Circuit Court of Appeals blocked registrations for three major dicamba brands. The court’s decision was largely based on accounts of dicamba-based products drifting into nearby fields after application and destroying non-DT crops.

Despite the Circuit Court’s ruling, EPA Administrator Andrew Wheeler defended the decision.”After reviewing substantial amounts of new information, conducting scientific assessments based on the best available science, and carefully considering input from stakeholders, we have reached a resolution that is good for our farmers and our environment,” Wheeler said.

Organizations like the American Farm Bureau, Georgia Cotton Commission, and weed scientists in the University of Georgia Extension praised the EPA’s decision mainly for “providing clarity” to farmers for the 2021 growing season and beyond.

What the Decision Means for Applicators

The EPA claims these control measures provide new flexibilities for growers and also address the concerns expressed in regard to the June Court of Appeals ruling.

What are your thoughts on the new dicamba control measures? Let us know on social media!