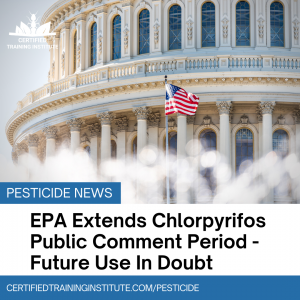 This month, the EPA extended the public comment period on its draft risk assessments (DRAs) and proposed interim decisions (PID) for chlorpyrifos to March 7, 2021. The purpose of the comment period is to “give the public and stakeholders more time to review and comment” on the December 2020 PID.

This extended comment period is part of the effort the EPA needs to take following President Biden’s “Protecting Public Health and the Environment and Restoring Science to Tackle the Climate Crisis” Executive Order.

The order aims to “review” actions taken by the previous administration across many government agencies. Action number 42 under the EPA section includes the “Chlorpyrifos; Final Order Denying Objections to March 2017 Petition Denial Order,” ruling. In “non-government speak,” this means the Biden administration is reviewing the sudden switch made by the Trump administration in early 2017 to block the outright ban of chlorpyrifos use – which started in 2015.

In a statement, the EPA said they will “follow the science and law in accordance with the Biden-Harris administration’s executive orders and the Federal Insecticide, Fungicide, and Rodenticide Act in reviewing the chlorpyrifos DRAs and PID to ensure they are protective of public health and the environment.”

Back on the Ban Path?

Many news publications (both in and out of the agricultural science industry), see this “review” process as a sign that the Biden administration is considering a return to the 2015 chlorpyrifos ban proposal.

Successful Farming reports the way chlorpyrifos could ultimately be banned is still uncertain, but “some former EPA directors predict it will most likely be revoked via a voluntary cancellation.” This process can take as little as 30 days and only requires general agreement within the industry.

Chemical & Engineering News (c&en) says a voluntary cancellation would be “easier than five years ago” because unlike in 2015, Corteva Agriscience (formerly Dow AgroSciences), the largest maker of chlorpyrifos, is unlikely to fight a ban because they already agreed to phase out production last year.

The other option is a formal procedure to ban the pesticide that could take two to three years. In the past 40 years, there have been no formal cancellations of any pesticide, says Bill Jordan, a former deputy director at the Office of Pesticide Programs at the EPA and now an industry consultant and a volunteer at the Environmental Protection Network. “EPA has always thought voluntary cancellation was a faster, cheaper, better process than a formal cancellation,” he says.

Regardless of the method used (if any at all), it’s clear to many that the EPA under the Biden administration will be very different compared to the Trump years. Biden himself has said he wants to take a close look at all current policies “that are harmful to public health, damaging to the environment, unsupported by the best available science, or otherwise not in the national interest.”

Kari Hamerschlag, an advisor on the DNC Council on the Climate Crisis, said “Our goal in the Biden years is to root out the corporate dominance and interference in policy and try and get it back to policy that is actually healthy for people and the planet.”

Possible Consequences of a Ban

According to c&en, outright banning chlorpyrifos could create problems in the pesticide supply chain because on January 12, a federal court ruling directed the EPA to remove the pesticide sulfoxaflor, one of the few alternatives to chlorpyrifos for some applications, from the US market while the agency evaluates the risks of that chemical to endangered species. Environmentalists sued the EPA for allowing sulfoxaflor back on the US market in 2019, after the agency banned it in 2015 because of adverse effects on bees.

The EPA is currently reevaluating 22 organophosphate pesticides, including chlorpyrifos, as part of a standard process to reassess pesticides after 15 years on the market. The agency expects to complete that review by Oct. 1, 2022. Unless the courts step in, or a voluntary cancellation occurs, chlorpyrifos use could continue until the end of the review.