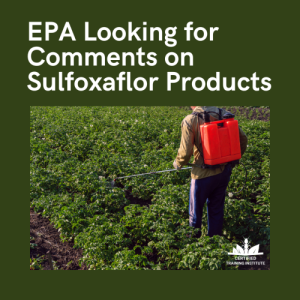 On July 19, the U.S. Environmental Protection Agency (EPA) released a new draft biological evaluation (BE) on the insecticide sulfoxaflor. In this article, we’ll give you a simplified version of the BE, some context about why sulfoxaflor is being evaluated again, and a link to share your own comments with the EPA.

The EPA’s latest BE on sulfoxaflor, an insecticide growers use to target pests such as aphids and tarnished plant bugs (lygus), analyzes the effects of the insecticide on federally listed endangered/threatened species and habitats. The EPA completed the BE to meet obligations under the Endangered Species Act (ESA).

According to the EPA, the evaluation found that “sulfoxaflor is likely to adversely affect certain listed species and designated critical habitats.”

Put simply, of the 1,700 species and 800 habitats evaluated, the EPA determined that unmitigated sulfoxaflor use would:

Despite concern from environmental groups, the EPA determined in this BE that “when compared to older insecticides like the neonicotinoids imidacloprid, clothianidin and thiamethoxam, and organophosphate insecticides malathion, chlorpyrifos and diazinon, sulfoxaflor is less persistent and less toxic to most species, which generally leads to lower risks to human health and the environment.”

The EPA says it is planning both immediate and future actions to protect species and habitats as a result of this BE.

Right now, the EPA is working with Corteva Agriscience, the makers of sulfoxaflor-based pesticides, on potential product label updates. Changes could include added or increased buffers, geographical use limits, and additional methods to reduce pesticide drift.

Future plans include taking public comments and suggestions for other mitigation measures to update and issue a final BE. Whether the EPA determines in this final BE that the agreed upon mitigation measures either do or do not affect listed species and habitats, the U.S. Fish and Wildlife Service and National Marine Fisheries Service will form a biological opinion.

Let Your Voice Be Heard

Do you have experience with sulfoxaflor-based products? It’s important to share your opinion with the EPA. Click here to submit your comments!

This isn’t the first time the EPA is evaluating sulfoxaflor. For nearly 10 years, the insecticide has gone through multiple approvals, cancellations, re-approvals, and lawsuits. Here’s a basic timeline:

The EPA approved sulfoxaflor for use on a variety of crops while also acknowledging potential risk to pollinator health.

A coalition of beekeepers associations sued the EPA, alleging that it had registered sulfoxaflor without showing that use of the pesticide would not cause unreasonable adverse effects. The U.S. 9th Circuit Court of Appeals agreed and forced the EPA to issue a cancellation order on all previously registered sulfoxaflor products.

The EPA re-registers sulfoxaflor with “fewer uses and additional requirements that will protect bees,” such as only allowing post-bloom application of sulfoxaflor on crops that could attract pollinators.

The EPA expands sulfoxaflor’s uses to include crops that attract pollinators and removes the post-bloom application restriction “only when there is low risk or limited potential for exposure to bees.”

Following this expanded registration, the same beekeeper coalition from the 2015 case joined the Center for Food Safety and the Center for Biological Diversity to sue the EPA. The group alleged that the EPA violated both the Federal Insecticide, Fungicide, and Rodenticide Act (FIFRA) and the ESA by expanding registration despite “failure to conduct any assessment of its effects on endangered and threatened species.”

The EPA reevaluated sulfoxaflor after lawsuit pressure, as explained in its 2022 ESA Workplan. As the EPA continues to evaluate sulfoxaflor, we’ll continue to keep you updated! And remember to share your thoughts and experiences with the EPA! The comment period is open until September 17, 2022.