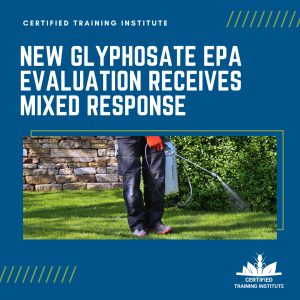 So far, the evaluation has garnered mixed reactions from different communities. This blog covers a simplified version of the EPAs findings, then shares how both environmental and farmer advocates are reacting.

The EPA defines a biological evaluation (BE) as a document that contains its own analysis of the potential effects a pesticide has on federally threatened or endangered species and their designated critical habitat.

In this specific BE, the EPA found that glyphosate, atrazine, and simazine (and all registered uses and approved product labels for pesticide products containing these three herbicides) are “likely to adversely affect certain listed species or their designated critical habitats.”

What does this mean exactly? The EPA says a “likely to adversely affect” (LAA) determination means that they expect at least one individual animal or plant, among a variety of listed species, may be exposed to the pesticide at a sufficient level to have an adverse effect – usually meaning “unintentional harm or death.”

What This Biological Evaluation Means for Applicators

The EPA may have released an LAA determination for these herbicides, but there is still plenty of work ahead before any concrete changes, like new label and use restrictions, are enacted.

Now, the LAA findings are in the hands of the U.S. Fish and Wildlife Services and National Marine Fisheries Service (dubbed “the Services”), who will develop their own biological opinions. If the Services find that these chemicals put an endangered species or critical habitat “in jeopardy,” they will work with EPA to “propose additional protections,” the EPA said.

According to this Progressive Farmer article, commercially available glyphosate-based products are already facing some big changes. Some changes in glyphosate’s commercial use are already underway. In July 2021, Bayer announced a five-point plan to manage and resolve future litigation risk from glyphosate-based Roundup. Back in July, Bayer announced it would stop selling the very popular Roundup weed control products for residential use starting in 2023.

When it comes to atrazine, the Biden administration is currently reviewing the Trump administration’s past decisions on atrazine’s registration, staying a federal lawsuit against the agency in the meantime.

The EPA also noted that in January 2021, atrazine and simazine registrants requested to “voluntarily prohibit use of the chemicals in Hawaii, Alaska, and the U.S. territories and to delete certain uses from their product registrations.”

“Registrants took this action to reduce the potential overlap between where these pesticides can be used and listed species and their critical habitats,” EPA said.

Industry Responses to the Findings

As is somewhat expected, the responses to the EPA’s BE have been mostly positive from environmental groups and negative from agricultural/farmer advocacy groups.

On the side of farm groups, the American Soybean Association (ASA) and American Farm Bureau Federation (AFBF) have been the most outspoken, going as far as saying the EPA “failed to use the best available science and data.”

Kevin Scott, a soybean farmer from South Dakota and the current president of the ASA said: “The law is clear that the EPA must use the ‘best scientific and commercial data available’ for its endangered species assessments, but the agency has indicated it has no intent of doing so.” Scott also claims that growers shared “better and credible” data with the EPA, “which it chose to ignore.”

AFBF President Zippy Duvall presented a similar opinion, saying that the EPA was presented with “real-world evidence of limited pesticide use but failed to use the most accurate data in its biological evaluations. By overestimating the use of these crop protection tools, the EPA also overestimated the impact on species.”

In a joint statement, both the ASA and AFBF claim that despite providing “real-world examples and data sources to EPA in public comments” the EPA “chose not to incorporate into its final BE.”

Some examples of the “real-world” data given by the farm groups include:

Whether or not the EPA outright “ignored” this data provided by farm groups isn’t for us to say. But the EPA released a document with many responses to public comments, and we linked it so it begins at the glyphosate BE section.

In a statement, Nathan Donley, the environmental health science director at the Center for Biological Diversity, said the EPAs findings are no surprise, since the US uses over 70 million pounds of atrazine and 300 million pounds of glyphosate every year.

“It’s long past time for atrazine to be banned, and the EPA needs to crack down on the reckless overuse of glyphosate. Without real conservation action, these pesticides will continue to push our most endangered wildlife closer to extinction,” Donley said.

The Center for Biological Diversity also said that atrazine is a “widespread pollutant of groundwater and drinking water.” They say it has been linked to increased risk of cancer and reproductive problems in people and can chemically castrate male frogs at extremely low concentrations, including those allowed in drinking water.

The future of these herbicides, and whether or not any regulation changes are coming, is still up in the air. Until “the Services” finish their own biological evaluations, advocates on every side of the issue will need to wait.

Until then, if you’d like to learn more about the EPA’s latest BE, check out their FAQ document. And remember to keep an eye on our blog in the future. Whatever comes of this BE, we’ll be sure to let you know!

Since you read this whole blog, you obviously care about pesticide safety. We offer company-wide WPS safety training programs that can save your business time and money. Learn more about it here!