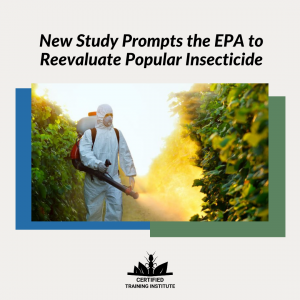 Last week, the Environmental Protection Agency (EPA) announced that they are seeking public comments on a new biological analysis from the Fish and Wildlife Service (FWS) regarding malathion, a common insecticide used to control mosquitoes and a variety of other insects. Read on to learn more about the FWS’s findings and where to comment – without all the convoluted government language!

Back in 2017, the EPA released a biological evaluation (BE) for malathion, which found that it was “likely to adversely affect” over 2,000 threatened and endangered species and their designated critical habitats. Because of this finding, the EPA has continued to work with the FWS to ensure the registration and continued use of malathion won’t jeopardize the continued existence of these species or their habitats.

In their newly released draft biological opinion, the FWS’s findings dropped dramatically compared to 2017, saying that 78 listed species could be jeopardized, and 23 critical habitats “could be adversely modified” by the use of malathion.

The US Fish and Wildlife Service recently determined that the insecticide malathion is likely a danger to many species and local habitats.

The FWS justified this lower number in their Executive Summary, stating “since the time the BE was submitted, there have been a number of species status changes, including reclassifications and delistings for listed species, and listing decisions for proposed and candidate species. We removed listed species that were in the BE from this consultation that have been delisted, along with proposed or candidate species for which listing was determined to be not warranted. We also added newly proposed and listed species and proposed and designated critical habitats that were not addressed in the BE.”

Along with their findings, the FWS provided several categories for potential actions. These actions are split up into two categories:

Before a biological opinion is finalized, FWS will work with EPA and the registrants to develop technologically and economically feasible RPAs/RPMs tailored to the needs of the species and critical habitats.

At this stage, the EPA is asking input on the RPAs and potential RPMs from pesticide users and  registrants. The public comment period will be open for 60 days and closes on June 19, 2021.

If you have opinions or suggestions, click here to share them with the EPA! And while we wait for further action, make sure you’re following the latest safe handling standards by checking out our online mosquito control courses. Start by choosing your state to see what’s available!