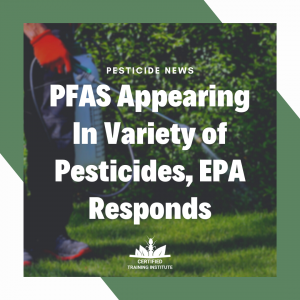 What does all of this mean for applicators thaused these contaminated products and who might have been exposed to PFAS? Read on to get a breakdown of all of the discoveries, test findings, and possible consequences.

PFAS are a group of man-made chemicals that can be found in food packaging, commercial household products, some drinking water, and more. Of the many variants, PFOA and PFOS are the most commonly produced and are known as “forever chemicals” – meaning they don’t break down or leave a person’s body over time.

The EPA recognizes that PFAS exposure can lead to “adverse health outcomes” such as low infant birth weights, effects on the immune system, cancer (PFOA), and thyroid hormone disruption (PFOS).

Per a new report from E&E News, PEER announced that their own testing revealed PFAS in the following pest control product:

Author’s Note: There are at least three other unnamed pesticides that showed PFAS levels during initial testing. PEER is still waiting for more result confirmations before putting their names out. These findings have not yet been evaluated or confirmed by the EPA.

The new findings listed above are part of PEER’s follow-up investigation after they discovered PFAS in a commonly used mosquito control insecticide, Anvil 10+10. PEER’s initial test results revealed that it contained roughly 250 parts per trillion (ppt) of PFOA, and 260 – 500 ppt of HFPO-DA (hexafluoropropylene oxide dimer acid, a “GenX” replacement for PFOA). Massachusetts, parts of Florida, New York, and many other states have all used Anvil 10+10 in aerial spraying programs.

“In Massachusetts, communities are struggling to remove PFAS from their drinking water supplies, while at the same time, we may be showering them with PFAS from the skies and roads,” stated PEER Science Policy Director Kyla Bennett, a scientist and attorney formerly with EPA, who arranged for the testing.

The EPA Steps In

In response to these findings, the EPA released the results of their own Anvil 10+10 investigation just last week. They discovered eight different PFAS compounds in the fluorinated (a chemical coating) high-density polyethylene (HDPE) containers, with levels ranging from 20-50 parts per billion.

Despite these findings, the EPA has this to say concerning possible exposure:

“The PFAS detections…from the tested containers do not represent PFAS concentrations in the environment or human exposure to PFAS. While the EPA is early in its investigation, the agency will use all available regulatory and non-regulatory tools to determine the scope of this emerging issue and its potential impact on human health and the environment.”

PEER says this response, and the EPA’s general testing method, is not enough. Bennett says the EPA should be more proactive in warning the public about the possibility and implications of PFAS contamination in pesticides.

“We now have five different manufacturers that are selling PFAS-contaminated pesticides,” Bennett said, noting PEER’s latest findings. “This is a problem of epic proportions.”

She’s also concerned that the EPA’s testing methods are too focused on PFAS coming from HDPE containers. PEER’s new tests (results listed above) revealed different PFAS compounds than were found in the Anvil 10+10 containers, raising questions about whether the chemicals could be getting into pesticides through other means.

One theory Bennett proposed for explaining the contamination would be pesticide manufacturers listing PFAS chemicals as an “inert” ingredient, because there’s no requirement to disclose inert ingredients to consumers.

But there are pesticide manufacturers that dispute the claim. Megan Provost, president of Responsible Industry for a Sound Environment (RISE), which represents nonagricultural pesticide producers, said, “PFAS chemistry is not an active or inert ingredient in any pesticide formulation” made by members in her coalition. She instead blamed container manufacturers, saying “fluorinated packaging is used for some 20% to 30% of pesticide formulations to increase product and packaging integrity.”

Regardless of who’s to blame, pesticides have a growing PFAS problem. In response, Anvil 10+10 manufacturer Clarke Mosquito Control Products Inc. confirmed in January that they voluntarily ceased all sales and shipments of the pesticide.

Massachusetts, Maine, and New York have all introduced or proposed bills that either limit or completely ban the use of any pesticide that contains (or might contain) PFAS due to florinated HDPE containers.

The EPA said they are “actively working with the Food and Drug Administration, the U.S. Department of Agriculture, and industry and trade organizations to raise awareness of this emerging issue and discuss expectations of product stewardship.”

If you suspect you have used a pesticide that may contain PFAS, you can file a report with the EPA here.